Go into a Hare

As society evolves, the way we react to the world around us reflects our changing attitudes. And so with folk song, as a living tradition, I want to reflect that in creating and interpreting the songs I sing. This blog series takes the six themes on my new album, Wrackline, exploring the folklore they are based in and how I responded to them. Two songs are about hares - specifically about the magical process of a woman able to cast herself into the shape of a hare. ‘Hare Spell’ grows out of a true historical event in the 1600s the other, ‘When She Comes’, is a response to the idea, developed during the Modern Fairies research project with poet, Sarah Hesketh.

Folklore concerning hares appears all over the world as Terri Windling explores in her blog. She finds they are:

symbols of women, femininity, female deities, and women's hedgerow magic, associated with the lunar cycle, fertility, longevity, and rebirth. If we dig a little deeper into their stories, we find that they are also contradictory, paradoxical creatures: symbols of both cleverness and foolishness, of femininity and androgyny, of cowardice and courage, of rampant sexuality and virginal purity. In some lands, Hare is the messenger of the Great Goddess, moving by moonlight between the human world and the realm of the gods; in other lands he is a god himself, wily deceiver and sacred world creator rolled into one.

There is a recurrent belief that a witch can shape-shift into a hare and cause mischief, and hares often appear as a witch’s familiar. Reasons put forward for this association are the hare’s human-like characteristics including standing upright on its hind legs and emitting an almost human cry when in distress. Another explanation is that hares are most often seen at dawn and dusk – the crossover times between day and night and the gateway between the human and the supernatural 'Otherworld'. Hares (as witches or their familiars) are sometimes associated with theft of milk or butter, including directly from cows. 'Purification' (e.g. in Manx legend) might take the form of heather burning to kill hares. Burning was assumed to either kill the witch or force her to reveal herself once more in human form. There is an interesting contrast with the Bodhisattva who, as a hare, threw himself into a fire because he only had himself to offer as food when Sakra, lord of devas in disguise, requested it. Rather than the familiar Man in the Moon, Buddhism accordingly talks about the face of the Hare appearing.

More positive perceptions link hares to fertility. Hares’ most active times coincide with the rising and setting of the moon – itself seen as a symbol of fertility and renewal – and their most bizarre behaviour occurs during early spring – another time linked to fertility. They have long been associated with the goddess Eostre as the echo of Easter Bunny still testifies, and I am delighted they are memorialised in chocolate.

In traditional song, the staple ‘The White Hare’ tells the tale of a particularly thrilling hunt where the hare gives such chase it was deemed fit for recording. Sung by Joseph Taylor in 1906, continued interest in this song and those from other hunts, shows continuing fascination with the animal’s tenacity. Moving smoothly from the thrill of hunting into acts of sexuality, ‘The Bonny Black Hare’ has innuendo abound. If you fancy a bit of classy smut, here is Martin Carthy singing with Dave Swarbrick. These songs show signs of the hare as somehow connected to human traits, though in traditional song, explicit reference to shapeshifting or the mystical element is not clearly drawn out. More contemporary composers have pointed to this more directly. Seth Lakeman drew on local tradition to make ‘The White Hare’, very closely linking the hare to the form of a trickster woman. The Eskdale Hare - written by Gus Gomersal and sung here by Ruth and Sadie Price - clearly brings out the witchcraft element. In exploring the mythical supernatural on the Modern Fairies project I became excited by the question of real magic and belief and spent some time looking at magical acts themselves, rather than the stories about them. Inge Thomson and I chatted about the nature of spells and where the magic lay. Words are commonly seen to hold power, but as musicians, we wondered how we could draw this out through sound. We toyed with the relationship of music to language noticing that pitches are conveniently given letter names. That evening at the very first meeting of the Modern Fairies, we mused about how music could come out of the words themselves.

I needed a spell, a real one that held magic. Jackie Morris Gave me some words about a hare and a little digging showed that it comes from Isobel Gowdie, the wife of John Gilbert, likely a cottar in Auldearn, near Inverness. Isobel was tried in 1662 during the witchcraft trials and her confession gives a clear account, seemingly uncoerced, into her activities with the devil and visiting the king of the fairie. She includes several spells and chants used to conduct her own magic, including this spell to turn the utterer into a hare to do the devil’s work. Part of Gowdie's words feature in the opening song ‘I Sall Go Intil a Hare’ from ‘The Fabled Hare’, Maddy Prior’s song cycle on the album Year. And for something a bit different, here is a tribute to ‘Isobel Goudie’ by The Sensational Alex Harvey Band. 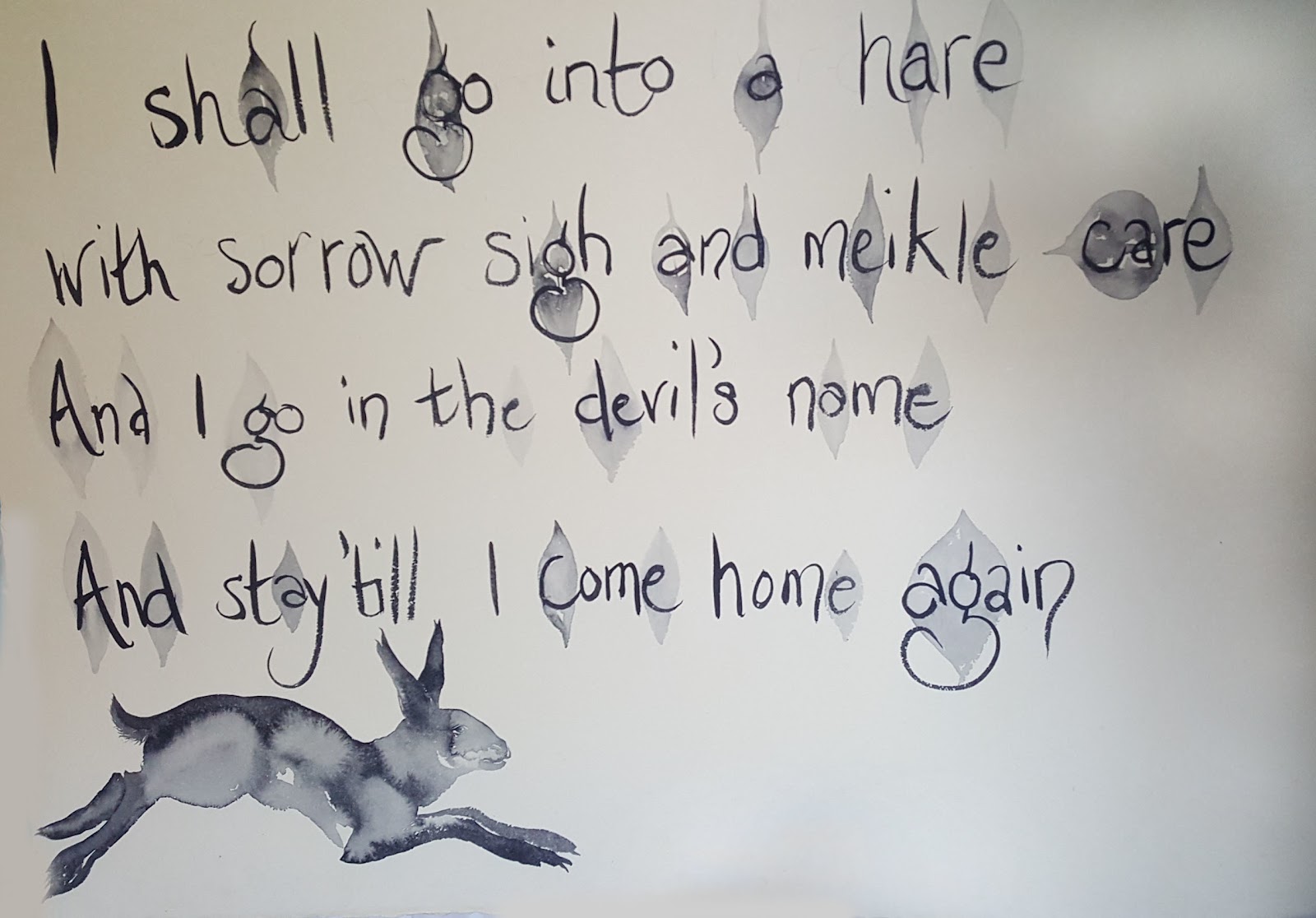 I copied out Gowdie's spell from a scan of the original manuscript, tweaking some of the heavily Scottish words to better suit my Yorkshire tongue (though ‘meikle’ seemed such a central part of the phrase I kept that). Next, I highlighted all the letters that fall onto the musical scale and took them over onto the stave into two, four-bar phrases. I selected a time signature of 9/8, as 3 sets of three has such magical potential.

The first line pitches fell easily onto the accented beats, the second part had more named notes, so involved a bit of jiggling to make sure they settled in interesting places. There is nothing special about how I chose passing notes to fill in the gaps, just what seemed to fit when I gave it voice. As I hummed through the emerging tune, some parts felt exotic, inciting the thrill of the unusual and unexpected, and as the passing notes linked the original pitches together a kind of sense emerged, we developed a musical understanding.

This was far simpler than I had anticipated, I remember Inge and I expecting it would sound dreadful when we thought of the idea. I kept checking I wasn’t losing the original pitches, but the spell notes held firm and their framework stands out clearly. Though it’s an odd sort of tune, it holds as music to my ears and people have said it is catchy. As I sang through the spell, the words needed reshaping and phrases were lengthened, repeated and extended to fit the melody - the music came out of the words, and the words were shaped by the music.

On playing with others we moved away from the notation and the rhythm of the words took over as I emphasised the shape of the unusual melody. The pitches stayed the same, but the time signature settled to a 6/8 - retaining the sense of three, but not forcing itself into ‘thryse over’. The song is the first single from Wrackline - see what you think below...

The second Hare song on the album grew from this as a collaboration with Sarah Hesketh. Here are her words about how she developed the ideas for ‘When she comes’:

‘One of the things I loved most about the Modern Fairies project was having the opportunity to eavesdrop on the creative process of the musicians. Listening to them create was a really useful way to trigger something new in my own creative thinking, and as I sat and listened to Fay transform her reading about Isobel Gowdie into song I found myself really drawn into the story she was beginning to tell through the music. Here were two characters - a woman and a hare, with an incredibly strange and intimate relationship. Fay's song 'I Shall Go Into a Hare' was a glimpse into that relationship from Isobel's point of view but what, I wondered did the hare have to say about it all? How did he feel about having his body appropriated for her eldritch purposes? Was this a kind of hi-jacking or was there something more complex and consensual going on between the two of them? I wanted to explore the idea that the hare might be more than just a passive vessel for Isobel's adventures, and how it might feel for him to have to say goodbye as she decided to return to her own body. The final line of the song 'I let her go' has an echo of Suzanne Vega's 'Calypso' about a similar kind of brief but intense relationship. When She Comes is thus a sort of love song, a song about a mutual intoxication and a lover who can't be tamed. But in an inversion of the typical story, this time it's the woman who can't be pinned down. The hare can only let her go on to her next adventure, and hope that some day she'll surprise him with her return.’

I hummed through Sarah's words and as I read, and this tune emerged. There is a lot of repetition in the melody and the magic of the music in this track, for me, is the underlying chordal structures that were explored and invented by Ben Nicholls and Inge Thomson during the third Modern Fairies workshop, and developed for the recording by Sam Sweeney and Rob Harbron. Here’s the version as it stood at the final Modern Fairies sharing at The Sage, Gateshead in April 2019.

Both songs are deeply rooted in both fact and folklore surrounding hare transformations. I feel that giving Gowdie's words new voice and Sarah’s take on it in particular add to that folklore; providing new perspectives that chime with current thinking. I am excited that Sarah, Inge, Terri and I continue to work on this theme through a new creative writing piece with writer Sarra Cullen for the Alternative Podcasts series - if you're caught in the spell of the hare story, follow them here to find out more.